As reported in CNET Health Tech ... 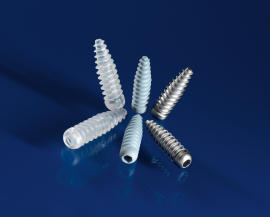 This month, researchers at the Fraunhofer Institute for Manufacturing Engineering and Applied Mate... (IFAM) in Bremen, Germany, are unveiling
a new type of screw that not only biodegrades within two years but
actually encourages bone growth into the implant itself so as not to
leave gaping holes where the screws used to be...

... IFAM engineers rely on conventional injection-molding methods, but they developed a granulate from the biomaterials with a net shape that results in a robust screw. The prototype's properties are very similar
to a real bone's, with compressive strength of more than 130 newtons per
square millimeter (a real bone withstands 130 to 180)...