... Federally-funded research has played a major role in the development of multiple recent… Continue

As reported in US News and World Report ... Smart phones and small hand held devices are making medicine safer and faster. They are being used to provide information, administrative and patient management services.And predictably, their use is shooting up.…
Continue

...Here are excerpts from the 10 innovations that Harvard Business Review thinks will have a big impact ...


1. Checklists Health care is catching on to something pilots have known for…

I went to my Orange County tooth extraction dentist yesterday. In my seven years as his patient, I thought I already know everything there is to know about teeth. Much to my
surprise, there are still things I don’t know about them.

One of the most important conferences in the connected media world of social networking, Web 2.0 and, maybe, emerging Enterprise 2.0 applications, is this week's South by Southwest Interactive (SXSWi) in Austin, Texas. See what's been deemed to be "Hot" by MediaPost's "Social Media Insider" ...

FOND-DES-BLANCS, Haiti — Before the earthquake… Continue

It is our privilege to announce to you that registration for the 15th Annual CyberPsychology and CyberTherapy Conference (CT15), the official conference of the International Association of CyberPsychology, Training, & Rehabilitation (iACToR), is now open!

Please visit www.e-therapy2010.org to begin your registration process to this groundbreaking conference! Early Registration ends on May 15, 2010 and space is… Continue

Attached are pdf versions of a few recent talks from the FDA workshop on PGx. Also I recommend that those people that don't have a basic understanding of PGx go to the web site from the American College of Clinical Pharmacology ("The Future of Medicine: Pharmacogenomics - http://user.accp1.org/index_new.html).

U.S. Congress (House of Representatives) Ban on Earmarks to For-Profit Entities ... Does it Signal a Fundamental Shift in Business Model?

Over the years, a non-trivial amount of funds have been committed to advanced medical technology research thru the Congressional Special Interest appropriations or Earmarking process. In a jolt to the way that business has been done over the last couple of decades, the U.S. House Appropriations Committee announced last week that it will no longer approve requests for earmarks directed to for-profit entities. The Committee leadership said that these new policies are not… Continue

Video of presentations from the Jan 25-27, 2010 workshop on Medical Device Interoperability have been uploaded:
Workshop website: http://mdpnp.org/FDA_Interop_Workshop.php
Link to final agenda. Look for video links within the agenda
Workshop slides:…
Continue

A boy uses a cell phone in Leogane, Haiti, January 20. The…
Continue


New York, NY – The Clinton Bush Haiti Fund (CBHF), established by
Presidents Bill Clinton and George W. Bush to raise money for Haiti relief and
recovery efforts after the January
earthquake, has appointed a Board of Directors and Chief…
Continue

A Vision for Personalized Medicine

As reported by MIT Tech Review ... An interview with P4 (Predictive, Personalized, Preventative, Participatory) pioneer, Dr Leroy Hood of the Institute for Systems Biology on the future of personalized medicine ... 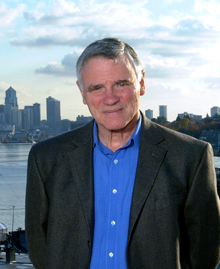 I would like to announce that we have created the Center for Health Information Technology at George Mason University to address the policy, analysis and technology issues facing the U.S Healthcare System.
The URL for the HIT Center is:
http://hit.gmu.edu/
We are looking for collaborators in industry, government and non-profits.
Please contact me if you are interested in…
Continue

The meetings will be at 3 p.m. March 17 and at 8:30 am March 27, both at the Wildwood Conference Center at Harrisburg Area Community College.