I have been calling this a “killer app” for remote applications since 2003. I spoke about the promise of such solutions at Stanford in 2004. I fully expected that the market would be large and growing by now.

Instead the market is at a point of crisis.

CardioNet, which has been trying to commercialize constant wireless heart monitoring for a few years now, is at a five-year low, and falling, because it can’t get insurance reimbursement for its system. (Picture from CardioNet.) 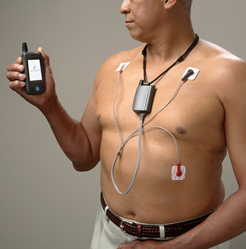 The latest “no,” from United Healthcare, seems especially discouraging. The insurer calls CardioNet’s solution “unproven,” preferring LOOP systems that are used intermittantly, when a patient feels the need for monitoring.

It’s a distinction without a difference to the insurers, but it’s a major difference if the patient has an active lifestyle. My late journalism teacher, Richard Schwarzlose, was riding his bike when he
suffered his fatal heart attack. He needed something that could record his condition, in real time. Something he could wear comfortably...

...  Highmark CMS, a northeastern payor that had been covering CardioNet, cut its reimbursement rates dramatically last year, leading to a freefall in the stock...

The problem, as its then-CEO said, was that CardioNet could not survive with the new rate, about $750 per patient.

That’s where I have a problem. Technology costs continue to fall. Carrier costs can be reduced by using text messaging. To me, the CardioNet solution is overly complex, and the company is too focused on the insurance industry...

...As seen in the illustration, it’s a pretty complex deal, with three EKG leads wired to a box worn around the neck, which in turn is linked wirelessly to the phone.

That’s a lot to wear. It should be possible to reduce this to a patch worn close to the heart, and a smaller monitor worn on the wrist, which can carry a heart-rate monitor on it and support Zigbee to the heart and a WiFi chip connected to a smartphone app.

CardioNet, in other words, is focused more on Washington than on Silicon Valley. It’s making the classic mistake of thinking more about its business model than the customer experience.

As a result, I think it is still missing a mass market opportunity. So is everyone else.