Should the Defense Department be making use of public social media sites such as Facebook, or should DOD, for security reasons, build its own?

Now that both the White House and Defense Department have established social media policies, more organizations are certain to leap into the fray and launch social networking sites.… Continue

Steve Wozniak On Apple Security, Employee Termination, and Gray PowellDuring last week’s iPhone leak saga, Steve Wozniak, co-founder of Apple, reached out to us with a story: The morning of the iPad …

Disruptive Changes Are Coming to the Delivery of Medical Care

We have grown accustomed to scientific research producing major medical advances such as those I wrote about in The Future of Medicine — Megatrends in Healthcare. But there are now some very disruptive changes coming in how medical care will be delivered by your doctor or hospital.

Team-based care for chronic illness. The combination of an aging population and… Continue

Is Technology a Cost Driver or a Cost Saver in Health Care?

The following was an invited post on the Harvard Business Review at http://blogs.hbr.org/cs/2010/04/is_technology_a_cost_driver_or.html

Pharmaceutical, biotechnology, and medical-device and equipment companies have been extremely effective at producing innovations that have created major benefits for medical care. But the cost of new patented drugs and devices (pacemakers, defibrillators, stents,… Continue

The Journal of CyberTherapy & Rehabilitation (JCR), the official journal of the International Association of CyberPsychology, Training, & Rehabilitation (iACToR) is a quarterly, peer-reviewed, scientific journal that explores the uses of advanced technologies for therapy, training, education, prevention, and rehabilitation and is currently indexed with PsycINFO, Gale and EBSCO. Led by an internationally renowned editorial board consisting of top clinicians,… Continue

The following was posted by me at Harvard Business Review yesterday. http://blogs.hbr.org/cs/2010/04/teamwork_can_help_avert_the_pe.html

Most health care money in the United States goes largely for the care of people with complex chronic illnesses such as diabetes, heart failure, cancer, lung disease, and the like. We will soon see many more individuals with these illnesses because of two factors: the… Continue

You may recall an earlier post about Fabienne Jean, a dancer from Haiti's National Theater who lost her right leg to infection and subsequent amputation in the aftermath of the Haitian earthquake, "Countless Lost Limbs Alter Life in Haiti’s Ruins", ...… 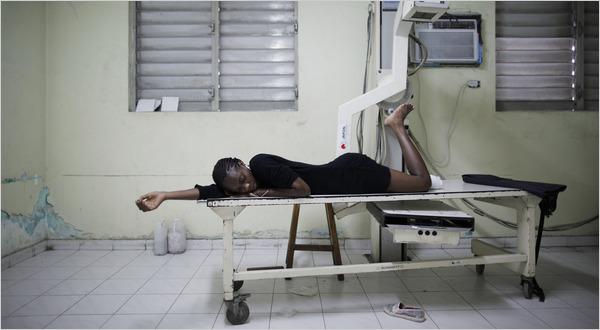 http://events.apple.com.edgesuite.net/1004fk8d5gt/event/ (Video length = 60 minutes)
Apple has had one incredible week. First the iPad release has exceeded market predictions. I've been somewhat skeptical, but the more I see & hear of this device, the more I think they may have another tiger by the tail. Time will tell.
If that weren't enough, now comes the…
Continue

We have tried the Kindle for use with medical students, and as Dr. Kim suggests the gray tones do not work for medical illustration. However, the bigger problem that we found was having medical textbook publishers move their titles to e-reader format with pictures. When we tested, very few publishers had e-editions of the necessry medical textbooks. The problem should be bigger today because there are now more e-formats.

In our testing, when we were able to find an e-version…

Should iPads be mandatory in medical school? ... Blog by Joseph Kim, MD, MPH

One of MedTech-IQ's members, Joseph Kim, MD, MPH, is also one of the Internet's top medical bloggers. Please see one his recent posts at medpageTODAY's KevinMD.com , "An iPad should be mandatory in medical school",… Continue

Clay Christensen: How to Bring Disruptive Innovation to Health Care

As reported in Harvard Business Review ... According to Clay Christensen, author of The Innovator’s Dilemma: When New Technologies Cause Great Firms to Fail ... Disruptive innovation seems to have bypassed the health care industry...

...Clay Christensen’s theory predicts that entrenched companies, products and services are often “disrupted” from below by competitors who are able to meet the needs of most current… Continue

Taking care of two aging parents, or having too much idle time ... feel…

Milan, Italy March 19, 2010 - What if lowering your stress level was as easy and as much fun as playing a video game? What if all of the work was automated for you, with reminders on your mobile phone? What if the system that achieved this was so smart, it changed the program the second you changed your behavior?

This is the vision of a new project funded by ICT for Health, European Commission. Called Interreality in the Management and Treatment… Continue